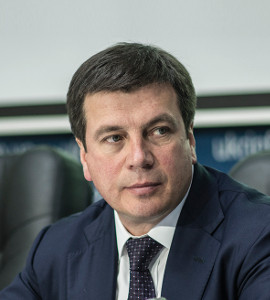 Hennadii Zubko has occupied the position from December, 2014. In April 2016, he as a successful manager of reforms joined the new Cabinet of Ministers of Ukraine.

In the Government he is responsible for the implementation of two key reforms in Ukraine - decentralization and energy efficiency reforms. He heads several intergovernmental commissions on economic cooperation, thus in his competence are questions of strengthening the export position of Ukraine and the promotion of domestic products to foreign markets. Hennadii Zubko is an anti-crisis manager, an expert on investments, construction and project management.

He started his career as a programmer engineer and then he grew his own business, led a number of enterprises and production projects. He had been a chairman of the PJSC "Zhytomyr Plant of Enclosing Structures" for ten years. During that time Hennadii Zubko brought the company to a qualitatively new level, implemented innovative management, carried out modernization, launched new production processes. As a result, the company gained a leading position in Ukraine in the production of building constructions and opened international markets for its products.

Hennadii Zubko’s political career began in 2006. He was a deputy in Zhytomyr Municipal and Regional Council. In 2012 he became a member of the Parliament; in Verkhovna Rada he was the First Deputy of the Committee on Construction, Regional Development, Housing and Communal Services and Regional Policy. In June-December, 2014, he worked as First Deputy Head of the Presidential Administration of Ukraine.

Hennadii Zubko has got several degrees. In 1991, he received the diploma of the Kyiv Polytechnic Institute, specialty Automated control systems. In 2006, he graduated from Northwestern University in Illinois, Chicago. The Innovation management course. In 2007, he received a master's degree in business administration in the Kyiv-Mohyla business school (MBA) at the National University of Kyiv-Mohyla Academy. And in 2008 – specialty Management of organizations, manager-economist at National University of "Kyiv-Mohyla Academy". In 2009 he got post-graduate education in the Ukrainian Research Institute "Project steel construction named after V. Shimanovsky". In 2012 he defended a thesis and received a scientific degree of the candidate of technical sciences. Author of more than 10 scientific works.