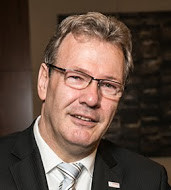 President of Bosch Group in the CIS

Since 2011 Gerhard Pfeifer is the Representative of all Bosch activities in Russia, the CIS and Georgia. In addition to that he is the General Director of the Bosch legal entities in Moscow and Tbilisi.

Prior to the actual appointment Gerhard Pfeifer has served as Executive Vice President Sales and Service Pneumatics of the Industrial Applications Business Unit in the Drive and Control Technology Division Bosch Rexroth AG since 2003.

Previously he held a position of Director of Corporate Development, Mergers and Acquisitions in Bosch Rexroth AG.

Gerhard Pfeifer, born in 1960 in Sinn/Hessen, Germany, graduated from Darmstadt University of Technology with a degree in Engineering economics. In 1989 he took a management intern-ship in Robert Bosch GmbH. Then for three years he was an assistant of a member of Bosch board of management.

Gerhard Pfeifer was a member of the Foreign affairs and trade committee of the German Engineering Federation (VDMA). Parallel to his duties Gerhard Pfeifer held supervisory board membership of Bosch Rexroth in France and Hungary.