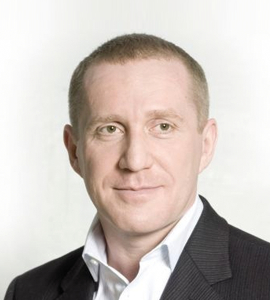 Mr. Fedin has been in the office of the Executive Director at Smart Maritime Group since April 2013.

In 2005 he became the General Director of Kherson Shipyard and remained on that post until April 2013.

Before his employment with Smart-Holding, he occupied managerial positions in the mining and metals industry and in the banking sector.

In 2003-2005, he occupied the post of the Investment and Corporate Rights Director of Dnepropetrovsk Metallurgical Works named after Petrovsky, OJSC.

In 1997-2003, he worked for Central GOK OJSC in his capacity as the Head of the Financial Department and later as the Deputy Chairman of the Management Board for Economy and Finance.

In 1992-1997, he was the Deputy Head and later the Head of Ternovskiy Department of Krivoy Rog Branch of Privatbank commercial bank (Dnepropetrovsk).

Vasiliy Fedin has also been a deputy of Kherson City Council and the Chairman of the Permanent Commission of the City Council for Planning, Finance, Budget and Social-Economic Development since 2006.

In 1999, Mr. Fedin graduated from the National Mining Academy of Ukraine with a degree in Finance. He continued his education in the Ukrainian Foreign Trade Academy where he received a degree in International Law in 2002.

In 2009, he completed his further study program at the Admiral Makarov National University of Shipbuilding where he majored in Ships and Ocean Engineering.