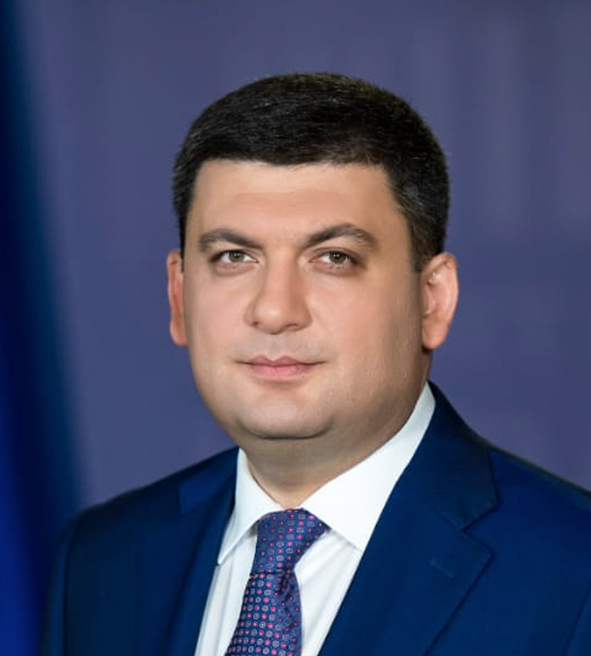 Volodymyr Groysman is the Prime Minister of Ukraine since April 14, 2016. Prior to taking the office, he served as Chairman of the Verkhovna Rada of Ukraine since November 27, 2014 after being elected at the early parliamentary elections on October 26, 2014.  From February 2014 until December 2014 he was the Vice Prime Minister of Ukraine and Minister of Regional Development, Construction, Housing and Communal Services of Ukraine, primarily responsible for the implementation of decentralization policies in the country.

Previously Mr. Groysman was the Mayor of the city of Vinnytsia. He was elected to this post in 2006 at the age of 28 and became the youngest Mayor of a regional centre in Ukraine. In 2010, he was re-elected for a second term, having received the support of 77.81% voters.

Serving as the Prime Minister of Ukraine after the 2014-2015 economic crisis and recession, Mr. Groysman managed to stabilize the financial system, initiate the economic renaissance, ensure Ukraine’s GDP growth, as well as prepare the launch of new large-scale reforms.

Decentralization, the pivotal reform supervised by Mr. Groysman during his terms in offices of the Vice Prime Minister of Ukraine, Chairman of the Verkhovna Rada of Ukraine and Prime Minister of Ukraine, has reached a qualitatively new level of implementation. The reform of inter-budget relations and amendments to the tax legislation led to the increase in cash flow to the local budgets, as well as established new progressive relations in the management of budget resources and growth of income base of local budgets. Owing to the decentralization reform, local budgets grew by UAH 192 billion in 2017. (Within January-July 2018 – 127 billion) and the trend continues to gain momentum.

Volodymyr Groysman also initiated to raise the minimum wage in Ukraine, launched pension reform, healthcare reform, implemented new standards at primary school, and continued the policy of direct support for households through communal subsidies. And these are just a part of transformation processes.

Moreover, in conformity with Mr. Groysman’s flagship idea “thorough overhaul of the country”, Ukraine’s highways have been undergoing profound modernization. The government also considers the construction of concessionary roads related to the implementation of European transport corridors blueprint. The energy efficiency reform carried out through the special governmental program is another important change, which has involved both public and civic sectors, aimed at modernizing crucial infrastructure facilities.